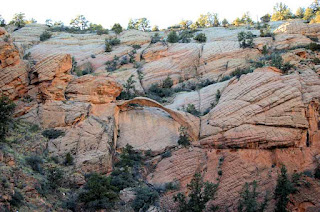 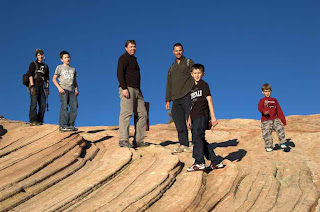 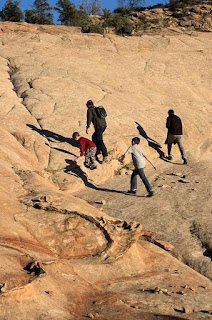 Utah is famous for its natural stone arches – we have an entire national park devoted to them (Arches National Park, or course.)

Arches are fairly common in southeastern and south-central Utah, but much less common in southwestern Utah. Zion National Park offers the famous Kolob Arch, which was long regarded as the largest arch in the world but is now officially listed in second place after Landscape Arch. Zion has a handful of other arches and they are smaller and relatively insignificant. In the greater St George area I only knew of a couple other arches. Until today that is. Today we stumbled upon a beautiful, graceful rock span halfway up Pine Valley Mountain.

I was surprised to find an arch in that area, and even more surprised that I have never heard of it before. I was born in the shadow of that mountain and I’ve spent my entire life hiking and exploring its many trails. It is a favorite play area.

I now live in the Provo area and only get down to Pine Valley a few times a year. One of my sisters lives in the town of Leeds, just east of St George, and she spends countless hours jogging and hiking the mountain’s trails and backroads. She told us of a scenic area on the mountain that resembles Checkerboard Mesa in Zion Park. We had some time today and decided to go check it out.

A rough dirt road cuts across the south slope of Pine Valley Mountain. Above the road you find steep mountain ridges that are heavily forested. Below the road there is a maze of very deep, narrow canyons and then a ring of red Navajo sandstone (the Navajo sandstone is easily visible as you drive I-15 south toward St George. To reach the checkboard area we drove the dirt road east from St George. The road eventually terminates at the Oak Grove road, which extends north from Leeds. (We could just as easily come in from the Leeds side.)

An old ranch, we call it the Danish Ranch, serves as a prominent landmark along the road. About one mile west of the Danish Ranch a spur road, Forest Road 905, drops south on a ridge above a deep canyon. The spur road dead ends just above a bowl that is filled with sandstone etched with a checkerboard pattern – much like the famous mesa in Zion Park. We had great fun hiking over the sandstone and exploring the bowl.

The bowl slopes downward and then ends with sheer cliffs that drop down into a deep canyon. As we explored the area near the cliffs, we looked up canyon and noticed the arch, perched high on the canyon wall. The arch looks frail, looks like it could collapse sometime soon. But now, while it is standing, it is an impressive sight.

It is strange that I’ve never head of the arch before. The area is remote and access is rough, but the area has obviously been thoroughly explored. I suppose it is another example of a spectacular sight in a state where spectacular is commonplace. In any other state the scenic slickrock bowl and impressive arch would be a popular attraction. In Utah, they are all but unknown and forgotten.

Together, they gave us a very enjoyable afternoon of adventure.

(Note: The dirt access road was dry when we visited on Dec 27, but many years it is snowcovered by that date. So far, this winter has been dry. Snow will eventually come and will cover the road for a couple months, making access difficult. This area is best explored during spring, summer and fall.)