Happy New Year. We hope 2014 has been a good year for you, and that 2015 is even better. Hope you fill it with epic adventures.

This blog is my last one for utah.com. That company about to launch some new, bigger, better initiatives and my blog will be discontinued. So, this is my farewell post.

While you won't see my ramblings here, I'll still be out there in the backcountry. Maybe I'll meet you on the trail.

With the economy continuing to improve, and with gas prices falling, 2015 will be a year to travel, enjoy new activities and experience wonderful destinations. Where to go? I'm sure every person's list will be different. Mine will be heavy on hiking, backpacking, boating and fishing.

Here's mine, heavy on hiking, backpacking, boating and fishing. These are adventures I actually plan to enjoy during the coming months.
I'll work in minor adventures between these epic trips. While I won't be reporting them here, I'll still be posting stuff online.

Highlights from last year.
It's not too late! You can still participate in Sundance Film Festival events this season if you act now. But you'll need to book lodging immediately and make plans on how to get the most out of your time there.

The festival website has complete details about “how to do Sundance.”

Lodging in Park City sells out fast but there are always options available in Salt Lake City and nearby communities. The festival is centered in Park City, but many events are held in SLC and some at other venues. It is an easy drive (or bus ride) from SLC to PC.

Plan ahead and learn the best ways to get to festival venues. Use public transportation as much as possible during the festival. Many roads will be closed or jammed and so it is difficult to drive to venues. Winter weather also causes traffic concerns. Buses and shuttles can take you almost everywhere you will want to go.

Bring Your Skis
You come to see film screening. Ok, most people come to try to see celebrities. But the festival events are exciting too. Many events are still open and you can get in, if you work at it.

But don't forget to bring your skis. People often assume the slopes will be overrun during the festival, with some many people in town, but the opposite is true. Most people are in town to party and so there is plenty of room on the slopes. 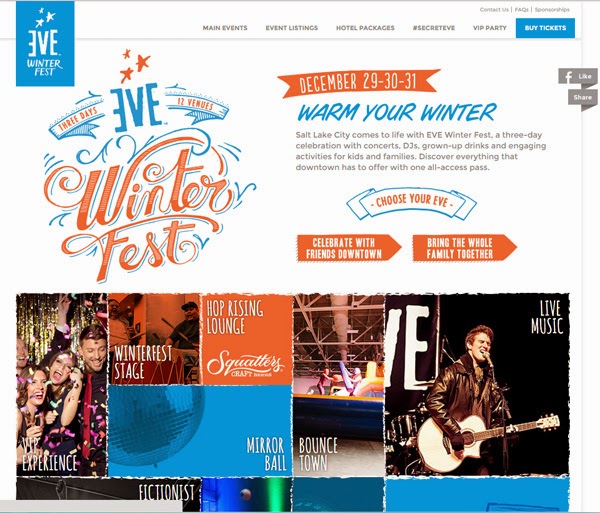 Celebrations will be held at all of our ski resorts, with multiple activities in Park City. Inquire locally for events held in other areas around Utah.

Salt Lake's EVE celebration offers something for everyone. Family-friendly events will be staged at Temple Square and other downtown area. The Deseret News has this article about Temple Square events.

Our friends at the Salt Lake Tribune have this article offering info for people who want a grown up celebration.

KSL.com reports that EVE will feature the largest disco ball in the US.

Some, but not all, events will be free. There will be music from various genres, plenty of food and drink (family-friendly and adult), plus dancing, art exhibits and activities, games, fireworks and other events.

Hope you can join the fun.

The next few weeks will bring the best skiing of the year.

Utah claims the “Greatest Snow on Earth,” and for good reason. This report talks about the scientific reasons behind the claim.

Avalanche danger is high in backcountry areas. A (Developed ski resorts do control work and so danger is mitigated there.) Utah Avalanche Center reports a skier triggered avalanche in Dutch Draw. It carried and partially buried the skier, but he is apparently recovering and will be ok.

Meanwhile, the ski industry continues to buzz about Vail Resort's plan to combine Park City Mountain Resort and Canyons Resort, creating the biggest ski resort in America. Forbes has this interesting article about the plan. Below are excerpts.

Just like heavyweight boxing, the title of the nation’s largest ski resort has been hotly fought over, debated, and even split between contenders. But those days seem to be over, with the Park City Mountain Resort in Utah ready to assume the undisputed, unified title.

I'm dreaming of a white Christmas, and that outcome is guaranteed. A major winter storm is bearing down on Utah and will dump heavy snow over most of the state. If you are traveling, take care. If you are skiing, just enjoy.

DeseretNews.com has this great article on what to do in Utah on Christmas Day:

What to do after the presents are opened? Here are some options for Christmas Day activities

Our ski resorts are open, of course, and you may just bump into Santa and Mrs. Claus.

Our national parks and most state parks are open, and are very beautiful when snow covered. (Zion may even get glazed by this storm.)

If you venture into the backcountry, be aware that avalanche danger will be high on most slopes. Take care.

On Christmas Eve, I enjoy walking through downtown Salt Lake City. Temple Square is aglow with multicolored lights. The square is filled with bustling crowds, and Christmas carols fill the air. It is very beautiful and worth a visit.

Away from Temple Square, many clubs are open and are full of cheerful people.

As I keep going, and the hour grows later, the sidewalks become deserted and a wonderful silence settles over the city. Snow begins to fall, the flakes sparkling as they dance in front of street lights. The snow adds to my feeling of serenity. At this moment, in this place, with silent snow blanketing the city, it is possible for me to believe that some day we may figure out how to create peace on earth.

Arches National Park is a geological wonderland and its popularity has grown to the point that parking is often a problem. The park is exploring various options to reduce congestion at key trailheads and parking areas. Meanwhile, there are many things visitors can do to minimize problems and ensure a wonderful experience when visiting the park.

Planning Your Trip
• Park is open 24/7. Use Sunrise/Sunset table to plan visits outside of 10 am to 4 pm peak hours.
• Early morning (sunrise) is always less busy than sunset. To beat the crowds, try entering the park before 8 a.m., though you may encounter groups of early-morning photographers at some destinations.
• Avoid visiting on BUSY Holidays/Weekends.
• Parking for oversize vehicles (RVs, trailers) is extremely limited. Leave oversized vehicles in town, or in the visitor center parking lot. Rent a car.
• Carpool if you can.
• Consider joining a tour for an Arches Park visit.

Where (and how) to Park
• Park in designated areas only.
• Abstain from parking on vegetation
• Park to keep traffic flow clear
• Refrain from blocking traffic waiting to park

Behind The Scenes At The World's Best Ski Hotel

Lee Benson has this interesting column in the Deseret News:

About Utah: They're best in the world

In the article he takes an intimate look at Deer Valley's Stein Eriksen Lodge, which was recently named the best ski hotel in the world. Below are excerpts.

Last month, Russ Olsen and his wife, Debi, found themselves in Kitzbuhel, Austria, at the World Ski Awards, aka The Ski Oscars, so Russ could receive, on behalf of Stein Eriksen Lodge, the hotel he manages in Park City, the trophy for best ski hotel in the United States.

That wasn’t totally unexpected. The winners from each country had been tipped off in advance. It was why Russ and Debi were there.

The totally unexpected part came next, when they announced the world’s best ski hotel.

Ela Clark, the British actress who was hosting the show, did the honors, ripping open the envelope and reading … “Stein Eriksen Lodge, Park City, Utah.”

Some 1 million votes were cast to determine the world’s best ski hotel, they told Russ. The ballots were sent worldwide to people involved in the ski, travel and tourism industry, including international travelers, booking agents, hoteliers, suppliers and other ski world connoisseurs. SEL’s win was no fluke. A lot of people had to vote for it to make it No. 1.

Russ knows the history well. He came to Stein Eriksen Lodge in 1986, just two years after it opened next door to the ski runs at Deer Valley resort, which had also just barely opened, boasting the great Norwegian ski champion Stein Eriksen as its director of skiing.

Stein wasn’t the hotel’s owner, but he helped with the design, he brought in his Olympic medals to display in the lobby, he sold the lodge the rights to his name, and as hotel ambassador he was given free run of the place in perpetuity. At 87, he still visits his lodge on a regular basis.

“I was shocked when they called our name,” he (Russ) says, “still am. Who expects that?”

Well, other than Stein Eriksen himself.

“He is our biggest fan,” says Russ. “I remember a day in March a few years ago. It was a beautiful sunny day and Stein came into the hotel after an afternoon of skiing. We were sitting in lounge chairs on the deck, staring at the sun as it was starting to set on the mountain. He said to me, ‘Russ, if we died and went to heaven, it would be a demotion.’ ”

And that was before getting to place the best hotel in the ski world trophy next to Stein’s 1952 Olympic gold medal.