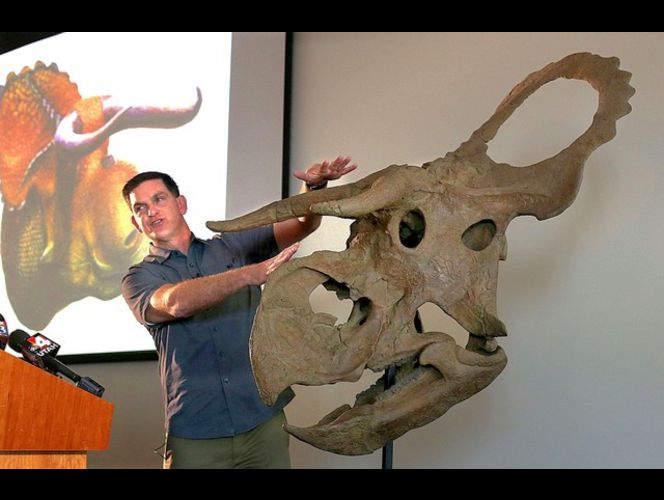 Paleontologists have announced the discovery of a new dinosaur, a Triceratops relative with a supersized nose that once roamed what is now Grand Staircase-Escalante National Monument in southern Utah.

Utah offers many great spots to hunt dinosaurs. The Grand Staircase is relatively new as a dinosaur hotspot, but continues to offer surprising new specimens.

KSL TV has this report about the finding. The report also gives good background info about dinosaurs in Grand Staircase. Below is an excerpt. Our photo is pulled from the KSL website.


The newly discovered species possesses several unique features, including an oversized nose relative to other members of the family, and exceptionally long, curving, forward-oriented horns over the eyes. The bony frill, rather than possessing elaborate ornamentations such as hooks or spikes, is relatively unadorned, with a simple, scalloped margin.

National Geographic has this report. Here are excerpts.


Nasutoceratops titusi belonged to a group of horned dinosaurs called ceratopsids, large four-legged herbivores that thrived during the Cretaceous period, according to a study released Tuesday.

Today, said Sampson, the vast expanse of untouched badlands is a "paleontologist's dream."

Within the continental United States, he said, "it's the last great relatively unexplored dinosaur boneyard."