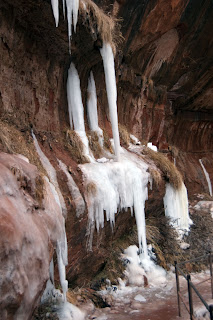 During winter, icicles form under seeps that trickle down the cliffs in Zion National Park. Many winter days are mild and bring warm, pleasant temperatures where ice melts. At other times cold temps allow icicles to grow into fanciful shapes - intricate castles made from smooth stalagmites and stalactites.

January temperatures have been particularly cold in Utah and so I spent some time in the park looking for opportunities to photograph the beautiful structures. But alas, weather in the St. George/Zion Park area has been super wonderfully nice during the past several days. I found myself hiking in warm sunshine, with few icicles to be found.

It was quite a change from the foggy, smoggy frigid conditions found in northern Utah, where we were flirting with all time cold temps. For several days in a row the thermometer was stuck in the low teens (F) even for daytime highs. 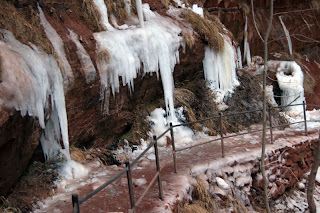 St George and Zion received quite a lot of snow earlier this month, and temperatures were quite cold there a week ago, but conditions were delightful during my visit. Virtually all of the snow has melted out of Zion Canyon. There is ice is some shady areas, but not as much as I expected to find. Hiking conditions were very pleasant and I really enjoyed my trip.

I did find some ice castles, as you can see from my photos. I had expected to find large daggers hanging from Weeping Rock, but I was a week late. There was a massive pile of broken ice beneath the overhang, where large icicles had softened and fallen. Even while I was there I saw several small icicles break away and fall from the cliff face. The trail was blocked to keep people from approaching too closely, because of the danger created by falling ice. 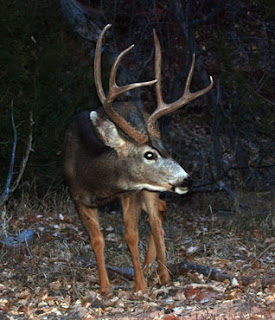 I also expected to find large stalagmites and stalactites under the waterfalls at Lower Emerald Pools. There was more ice in that area, including some photogenic flows.

I was surprised by the number of mule deer I saw in Zion Canyon. I counted two dozen, including many that were easily visible right along the road. If you drive through Zion Canyon between sunset and dark, and you keep your eyes open, you will undoubtedly see impressive animals.

I was fortunate to get photos and video of a large buck just across the river from Zion Lodge. He was feeding in thick brush and basically ignored me as I shot photos. He had 4 points on one side and 3 on the other.

I also saw a fox, two eagles and numerous other brids.

It was a fun trip.