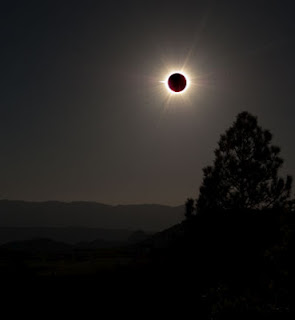 I spent Sunday evening in Zion Park, at a scenic lookout where I was able to witness the full glory of the "ring of fire" eclipse. It was amazing.

I ended up viewing it from KolobTerrace, near the Wildcat Trailhead. I was surprised at how many other people joined me at that remote viewpoint. I scouted around to find a sweet spot, and apparently others did the same thing. There were a a couple dozen people in my immediate area and a hundred more stopped at various points along the road.

This was my first attempt to photograph a total eclipse and I didn't do very well. My filter system was inadequate. I did some research to prepare for the event and then elected to try some of my own ideas. My goal was to shoot the eclipse while also showing some dramatic Zion Park scenery. That was very difficult. If I exposed for the sun, the scenery was totally black. If I exposed for the scenery, the sun washed out.

My scheme was to put my camera on manual and stop down the lens while shooting at a fast shutter speed. I hoped by doing that, at the darkest point of the eclipse, I would not need much filtering. Wrong. Even when the eclipse was total, the sun was still powerful enough to wash out the exposure. I'll know better next time.

I considered shooting from the top of Angels Landing. As I scouted, I discovered that the horizon west of that viewpoint would not be as low as I wanted. The top of Angels affords a great view down Zion Canyon, which I always assumed fell off to the west. I assumed that the eclipsing sun would set in that direction. Wrong. That view is mostly to the south. From Angels, the sun sets over the West Rim, which is higher than the landing and so it would have obstructed the view as the sun moved lower.

The Salt Lake Tribune has this great article about the eclipse, illustrated with great photos.

Utah parks are wonderful spots to view the night sky. Several have been recognized for their dark skies. Bryce Canyon and Natural Bridges National Monument hold regular star parties and other astro-events. Check them out.